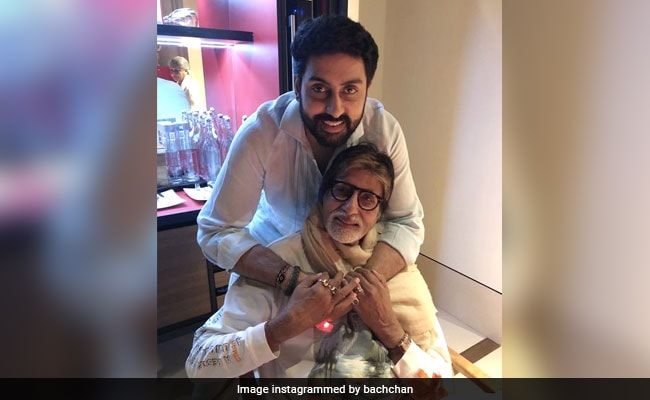 First, let us wish Abhishek Bachchan a very happy birthday. He turns 46 today. Fans have flooded and the Wishes are pouring in from all corners for Junior Bachchan. And, on the happy occasion, there is a special gift for all Abhishek Bachchan fans out there. This has come from the actor himself. He has shared a picture of a clapboard from the sets of his upcoming project Ghoomer. It’s the first day of the shoot. And, Abhishek Bachchan can’t keep calm. Caption? “Can’t ask for a better birthday present. Birthdays are best spent working. Now spinning,” he wrote. One of the first comments came from his father, veteran actor Amitabh Bachchan himself. “Janamdin ki bahut sari badhai. Aur Ghoomer k liye bhi… Ab jhande gadna ka samaj a gaya hai. [Wish you a very happy birthday. And, congratulations on Ghoomer],” he wrote.

Next in line was Abhishek Bachchan’s sister, Shweta Bachchan Nanda. She has extended her support with a black heart emoji. Her daughter, Navya Naveli Nanda followed suit. Actor Neil Nithin Mukesh wished him luck for the new beginnings. He wrote, “Happiest Birthday. my dearest big brother. Have a blessed day and year ahead. All the best for new beginnings.”

Esha Deol has also sent her warmest greetings on the occasion. She wrote, “ Happy Birthday, AB.” Esha and Abhishek Bachchan have shared the screen space in films like Dhoom, LOC: Kargil and Dus.

Ghoomer is directed by R Balki. The shooting will take place in Mahabaleshwar.  The project is backed by Hope Productions.

Abhishek Bachchan also has Dasvi in the lineup. He will play Ganga Ram Chaudhary in the Tushar Jalota directorial. Yami Gautam and Nimrat Kaur are also part of the project.

Once again, we wish Abhishek Bachchan a wonderful birthday.