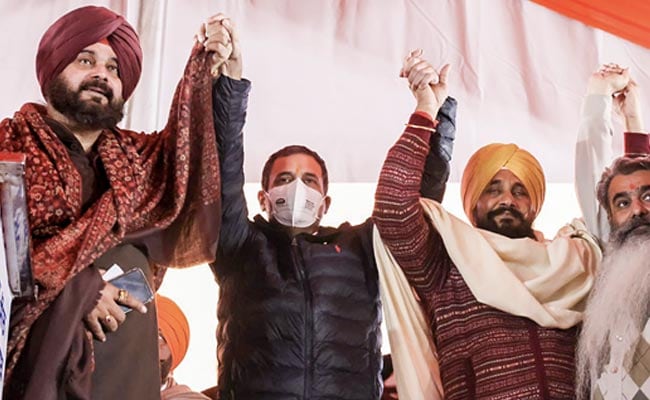 Punjab votes on February 20 and the results will be declared on March 10.

Notably, this comes a day after Mr Channi’s nephew Bhupendra Singh Honey was arrested by the Enforcement Directorate (ED) in an illegal sand-mining case.

A jittery Mr Sidhu has stepped up his attack on his own party as Mr Channi seems to be the frontrunner for the post. The state Congress chief had yesterday launched a direct attack at his rival Charanjit Singh Channi and said the party must choose someone “honest and with a clean track record”.

Congress has recently given several indications that Mr Channi was favoured for the top job. It is also running a public survey through IVR (Interactive Voice Response) calls to allow people of the state to choose who they favour for the post. Sources say Mr Channi is leading that survey as well.

Following the arrest of Mr Channi’s relative, Navjot Sidhu used the opportunity to present his case.

“If you choose someone devoid of moral authority, devoid of ethics or someone who is dishonest and part of some corruption and mafia, then people will vote for change and bury you like a mooli,” the Punjab Congress chief told NDTV in an exclusive interview.

In his attack on his rival for the chief minister’s post, Mr Sidhu seems to be validating the Aam Aadmi Party’s accusations of Mr Channi being the sand mining ‘mafia’ and protecting criminals involved in illegal sand mining.

“We need an honest candidate. Your destiny depends on what you choose. It is choice, not chance that determines your destiny. A ‘mafia-type person’ cannot implement your programmes. A person who himself is mafia protector-in-chief, how can he crack down on the mafia?” Mr Sidhu had said.

Mr Channi has been nominated from two assembly constituencies leading to speculations around him being favoured by the party and allowing him a backup chance if he loses in one of the seats.

Mr Sidhu has also repeatedly tried to project himself as the candidate.

A video clip starring Charanjit Channi, with a subtle endorsement by actor Sonu Sood, posted by the party last month had also triggered speculations of him being the party’s choice.

Punjab votes on February 20 and the results will be declared on March 10.