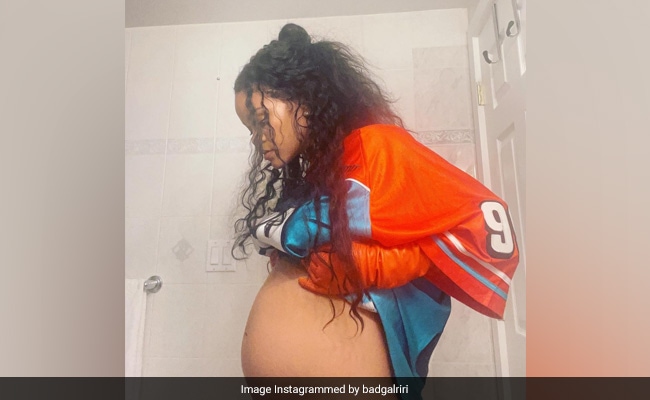 Rihanna shared a picture of her baby bump on Instagram.

On Wednesday night, Rihanna shared a new picture of her baby bump along with previously-published ones – but fans of the singer and billionaire businesswoman were left surprised by a detail they noticed in the photograph. Rihanna had revealed earlier this week that she is expecting her first child with boyfriend A$AP Rocky. Her new photo shows her lifting up her jersey to reveal her baby bump, but many eyes were immediately drawn to the background of the picture. The photo appears to have been taken in a less-than-luxurious bathroom, which surprised a number of social media users who wondered what Rihanna – with an estimated net worth of $1.7 billion – was doing in a “basic” white-tiled bathroom.

Take a look at the picture in question below:

“Whose normal bathroom is this!” one Twitter user wondered while sharing Rihanna’s pic on the microblogging platform. Her tweet racked up over 17,000 ‘likes’ and hundreds of similar reactions.

Whose normal bathroom is this! pic.twitter.com/vrnes4g66e

“What’s Rihanna doing in a run-of-the-mill apartment bathroom? Girl you are a billionaire,” another wrote.

what’s rihanna doing in a run of the mill apartment bathroom??? girl u r a billionaire pic.twitter.com/I5kPMnyj63

Many wondered what she was doing in a “basic” bathroom

why does bad girl @rihanna have such a basic bathroom 😭😭 pic.twitter.com/JXwy7rkGzz

Reactions were similar on Instagram, where surprised comments at the location of the photograph mingled with congratulatory messages.

“I can’t take my eyes off the bathroom hooks,” one Instagram user wrote, while another remarked: “I volunteer to redesign that bathroom”.

There were also those who applauded the Fenty Beauty founder for upending expectations.

“Nobody is featuring this bathroom in Architectural Digest. But here’s Rihanna, a billionaire, throwing up her first Instagram pregnancy photo of herself in the most no frills way possible and once again upending expectations.”

Not people upset that Rihanna posted a ‘basic’ pic of her belly while in a ‘basic’ bathroom. ????

I personally LOVE IT. I feel like she’s about to challenge some of the toxic aesthetic expectations around pregnancy/postpartum and I’m here for it.

Rihanna and A$AP Rocky were photographed out and about in New York City over the weekend, with the 33-year-old singer dressed in a long pink jacket unbuttoned at the bottom to reveal her growing belly. The images were released and posted on Instagram Monday by the celebrity photographer Miles Diggs.

Rihanna shared some pics from the pregnancy photoshoot on Instagram two days later, along with the new image in the now-famous bathroom.

According to AFP, Rihanna, has been teasing her legions of fans about a forthcoming album for years. Her last studio release was in 2016.

Since then the Barbadian born Robyn Rihanna Fenty has become a billionaire, parlaying her success in music into successful makeup, lingerie and high fashion brands.