Police have recovered countrymade pistols from the two accused. ANI

Two people have been arrested for firing at the convoy of Asaduddin Owaisi, MP and chief of the All India Majlis-e-Ittehadul Muslimeen (AIMIM), while he was returning to Delhi yesterday after campaigning in Uttar Pradesh’s Meerut.

According to police, they have said during questioning that they were hurt by Mr Owaisi’s alleged “remarks against one particular religion”.

Mr Owaisi last night tweeted visuals showing two bullet holes on his white SUV. The third bullet allegedly hit a tyre. The MP said he was unharmed and left the area in another car. 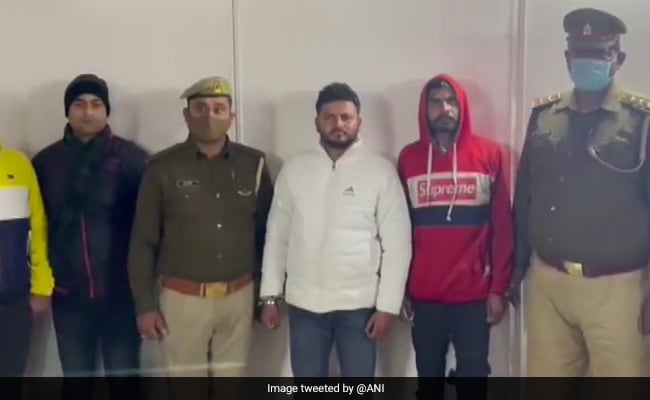 One of the accused is Sachin, a resident of Noida who has an earlier attempt to murder case against him. While he has claimed that he holds a law degree, police are verifying it. In his Facebook profile, Sachin says he is a member of a Hindu right-wing organisation, police said, adding that they are investigating the claim.

The other accused is Shubham, a farmer from Saharanpur who does not have a criminal record.

According to police, the two have told them during questioning that they were upset with remarks made by Mr Owaisi and his brother and MLA Akbaruddin Owaisi. “The accused said they were hurt by his (Asaduddin Owaisi) remarks against a particular religion. They will be produced before the court,” Additional Director General of Police, Law And Order, Prashant Kumar said, according to news agency ANI.

Police have recovered countrymade pistols from them which they had recently purchased. Police are now looking for the people they bought the firearms from.

The accused will now be presented in court and police would seek their custody.

Mr Owaisi was today provided Z category security cover by the Central Reserve Police Force (CRPF) after the government reviewed the threat level in the light of last night’s attack.