The Bank of England increased its key interest rate in a bid to contain the fastest inflation in three decades, with some policy makers unexpectedly seeking a more aggressive response to rising prices.

The Monetary Policy Committee voted to raise borrowing costs by 25 basis points to 0.5% on Thursday. Four out of the nine-member panel pushed for a 50 basis-point increase, which would have been unprecedented since the central bank gained independence from government in 1997.

The move ushered in a new era where the BOE will start to unwind 895 billion pounds ($1.2 trillion) of bond holdings it amassed over the past decade to stimulate the economy.

The decision came shortly after Chancellor of the Exchequer Rishi Sunak announcing a 9 billion-pound program to help consumers shoulder rising energy bills. Costlier fuel helps explain why the BOE worries that inflation could soon peak at more than triple its target.

“We have not raised rates today because the economy is roaring away,” Governor Andrew Bailey said at a press briefing in London after the decision on Thursday. “We face the risk that some of the higher imported inflation could become entrained within the domestic economy, leading to a longer period of high inflation.” 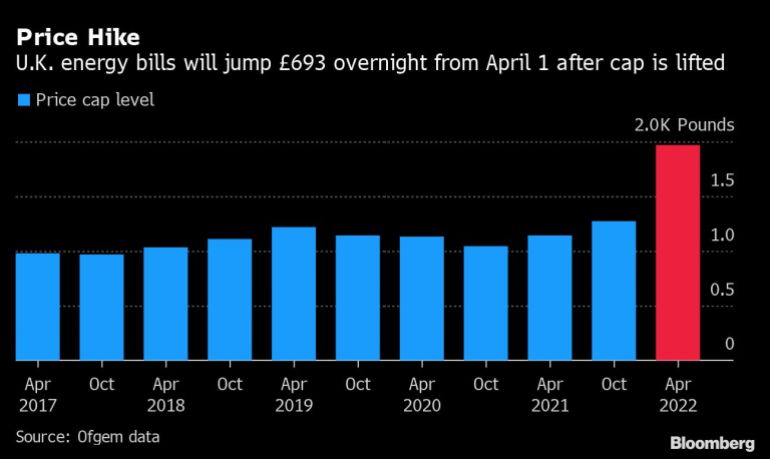 The pound climbed along with yields on government bonds and shares of U.K. banks. Traders pushed rate-hike bets forward, predicting borrowing costs would hit 1% by May.

The U.K. central bank is leading the way in a global tightening of monetary policy, as institutions move to tackle a rapid acceleration of prices in the aftermath of pandemic lockdowns. The U.S. Federal Reserve is expected to unleash its own rapid tightening cycle this year, and there has been speculation that may include a 50-basis-point hike.

“The BOE is the first major central bank embarking on the inflation fighting experiment in the environment of slowing growth momentum and continued dislocations in the energy markets,” said Anna Stupnytska, global macro economist at Fidelity International.

The BOE will immediately stop reinvesting the proceeds of expired gilts, allowing more than 200 billion pounds to run off by 2025. It announced plans to offload the entire 20 billion pound stock of corporate bonds by the end of 2023.

“Some further modest tightening is likely to be appropriate in the coming months” if the economy evolves as the BOE expects, the rate-setting committee added.

Stressing its inflation-fighting mandate, the BOE said that “the remit is clear the inflation target applies at all times, reflecting the primacy of price stability in the U.K. monetary policy framework.”

BOE officials lifted their forecasts for the peak of inflation to 7.25% in April, more than triple the BOE’s 2% target. Inflation had previously been expected to peak around 6%.

Against that backdrop, four officials – Dave Ramsden, Michael Saunders, Catherine Mann and Jonathan Haskel – voted to boost rates by 50 basis points, seeing the need to act faster to curb inflation expectations. The majority, including Bailey, opted for the 25-basis-point rise.

“Given the uncertainties, however, it should be no surprise that the exact size of the response was a close call in the Monetary Policy Committee,” Bailey said.

All members of the MPC said further modest tightening would be needed in coming months, and the decision to end gilt repurchases was unanimous. The increase marks the first back-to-back hike since 2004.

The decision also comes with the U.K. in the grip of a cost of living crisis, which will bite harder starting in April when higher taxes and energy prices hit consumers.

Despite the improved outlook for wages, the BOE warned that real household incomes, after adjusting for inflation and tax rises, will shrink both this year and next.

An hour before the BOE’s announcement, the U.K. energy regulator Ofgem said the energy bill for a typical household will rise 54%, or around pounds, in April. Sunak pledged support that will reduce the sting of that increase.

“The No. 1 issue on people’s minds is the cost of living,” Sunak said in Parliament moments before the BOE decision. “We will help people deal with one of the biggest costs they face. Without government action, this would be incredibly tough for millions of hard working families. So the government is going to step in.”

While the BOE admitted the hike itself can do little to address those immediate price rises, it stressed that moving now is necessary to anchor longer-term stability.

“The sharp rises in prices of global energy and tradable goods of which the U.K. is a net importer will weigh on real aggregate income and spending,” the BOE said. “This is something monetary policy is unable to prevent.”

The squeeze on incomes will drive unemployment up to 5%, from around 4% now, and lead to increased slack in the economy by the end of the forecast period. The economy is expected to return to its pre-pandemic level this quarter, with growth recovering from the hit from omicron restrictions in February and March.

After that, growth is expected to slow to “subdued rates”, with a slightly weaker outlook than in November due to the impact of the cost of living crisis.

The BOE currently forecasts inflation will be a little above target in two years’ time, and drop below their goal in three years. The projection is based on interest rates reaching 1.5% by the middle of next year, which suggests the BOE may not go that far.

An alternative scenario, based on energy prices following their futures curve, rather than remaining constant after six months, would lead to inflation dropping to around 0.75 points below target in two and three years’ time.

Markets have priced in steeper hikes since the forecast window was closed, and are close to pricing in a level of 1.5% by the end of this year. That would imply the biggest tightening of policy for any calendar year since 1997.

The BOE also said it would immediately halt the process of reinvesting the proceeds from expired bonds held under its QE program, the first step in reducing its balance sheet.

That will start in March, when 28 billion pounds of gilts mature. The bank reiterated it will start considering accelerating the process by pursuing active sales once rates hit at least 1%.

The bank will halt reinvestments of its 20 billion-pound corporate bond plan, and design a program for outright sales. That will unwind the entire stock toward the end of 2023 at the earliest.

(Updates with comment from Bailey from the fourth paragraph.)
–With assistance from Libby Cherry.