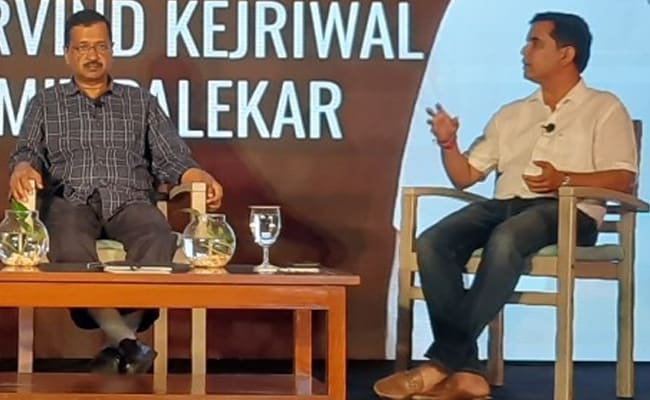 Asked why AAP selected Mr Palekar, a complete newcomer to politics, Mr Kejriwal quipped “Why not?”

Aam Aadmi Party chief Arvind Kejriwal had held a telepoll to decide on his Chief Ministerial face for Punjab. But there was no such ceremony in Goa. Amit Palekar, a lawyer and social worker, was the straightforward choice. “A love marriage”, “A perfect love marriage” was how they described the chemistry at NDTV’s townhall today.

Asked why AAP selected Mr Palekar, a complete newcomer to politics, Mr Kejriwal quipped “Why not?”

“He is one of the best suited candidates. He is educated. He is honest. And he is ready to do anything for the people of Goa… He is a fresh face. Not like the existing politicians who are responsible for the situation in Goa,” he said.

“Leaving aside the humour, AAP is the most credible honest option in Goa… That’s why you fall in love with the party,” Mr Palekar added in answer to why AAP.

Both are hopeful that the love affair should extend to the people for AAP, Mr Kejriwal said, was the only choice for an honest government.

Mr Palekar is from the OBC Bhandari community, which accounts for about 35 per cent of Goa’s population. This is the largest section in Goa which never had a full-term Chief Minister in 60 years “because political parties decided they are not up to the job. This is wrong,” said Mr Kejriwal. Brushing away the allegations of caste politics, he said “We are correcting a injustice brought about by their caste politics”.

“The Congress and the BJP have no policy. No one has spoken of Goa. The morning papers only announce which candidate has gone to which party. What is going on in Goa? If you ask the people, they will say this one was promised Rs 10 crore and only the first installment came so he crossed over,” said Mr Kejriwal, whose 40 candidates have all signed a loyalty and honesty pledge that is legally enforceable by “any voter”.

The Delhi Chief Minister, who has laid before the people an ambitious 13-point agenda that closely reflects the policies he is following in Delhi, said in Goa AAP is the only party “which talks about your children, their education, their employment, mining, schools, hospitals, electricity, road, water, women’s issues…”

The tiny coastal state, they insisted, had enough funds for all.

Contending that the state has a Rs 21,000 crore budget each year, Mr Palekar said currently the per capita spending is about 1 lakh plus. “Where is the money going? Everything is here. Just there is no political will,” he added.

“In the last 10 years, there has been no new school, college or university, hospital or dispensary or road. But there is a debt of 23,000 crore. Where did this money go? It has gone to these people’s pockets, to Swiss banks… Now it will go to Goa. We have showed how it is done in Delhi, ” Mr Kejriwal added.