An Insipid Budget That Nobody Will Remember

This wasn’t the Nirmala Sitharaman we know. Gone was the pugnacious, confident, and lively Finance Minister, enthusiastically delivering the Government’s statement of the year. Instead, as she revealed her fourth Budget, we heard a tired Finance Minister, worn down by two years of fighting the pandemic to keep a ‘balanced Budget’, delivering a much-shorter-than-normal Budget speech, which for the most part had nothing much to offer to most. And that’s how the stock markets reacted as well, range-bound within 400 points for the day.

For the average Anil, there was nothing. No tax relief, no change in tax rates and no suggestion that there would be some in the future. Which is why the NDTV online survey gives it a weak 2.4 out of 5 rating.

To be fair to the Finance Minister, for the first half hour of her speech, she did try and push the big government thrust, “PM Gati Shakti”, the seven-engine drive for infrastructure (including roads, railways and education). While she highlighted the substantial increase in capital expenditure, the amount is actually not that significant given the actuals (what was actually spent or Revised Estimate) for this year. 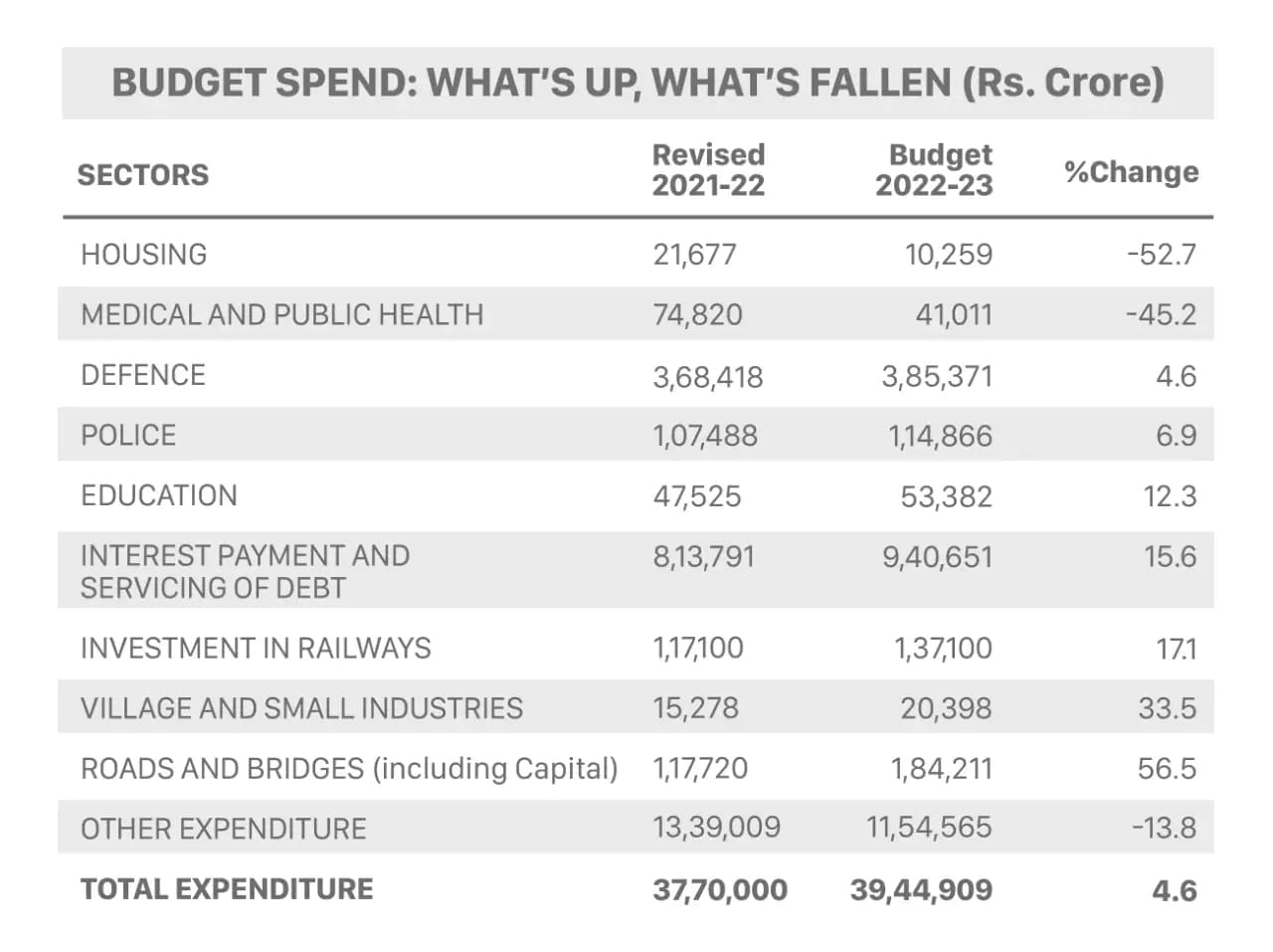 Firstly, the overall spend is up just 4.6% which is probably in line with, or lower than, what inflation will be next year. Other expenditure is down a whopping 14%. Public health is down Rs 40,000 cr because of reduced vaccination costs (which clearly indicates that the government isn’t going to offer free boosters to everyone).

Defence, despite all our (56-inch) chest-thumping gets 4% more, smaller than the police. Is internal security more important than external? And in real terms, this is second year with no real increase (corrected for inflation) in defence expenditure. The government has decided that the demand for subsidized urban housing, according to its own note, is either not needed or not a priority. Obviously, no one is looking at the slums in major cities anymore.

The fact is that most ministries and projects of the government have got little or marginal increases. Besides infrastructure, even what the government calls Core of Core schemes (including MGNREGS) face a cut, and only New Core Schemes have got any real increase.

It’s not clear whether the government is just hoping that expenses aren’t incurred or has just penciled in numbers unlikely to be achieved. Food and fertilizer subsidies show considerable cuts for the coming year. Given that the government has misjudged these two years in a row, it is difficult to fathom.

The problem seems to be two-fold. One is to keep the fiscal deficit within some acceptable range, that is under 7% – and so they have budgeted 7%. The second is that despite revenues being up this year, including GST, there seems to be a conservative approach to how much they will go up next year. The Finance Minister announced a whopping Rs 1,41,000+ cr GST collection for January, the highest ever. But the projections for next year seem very conservative at an overall 9.5%. 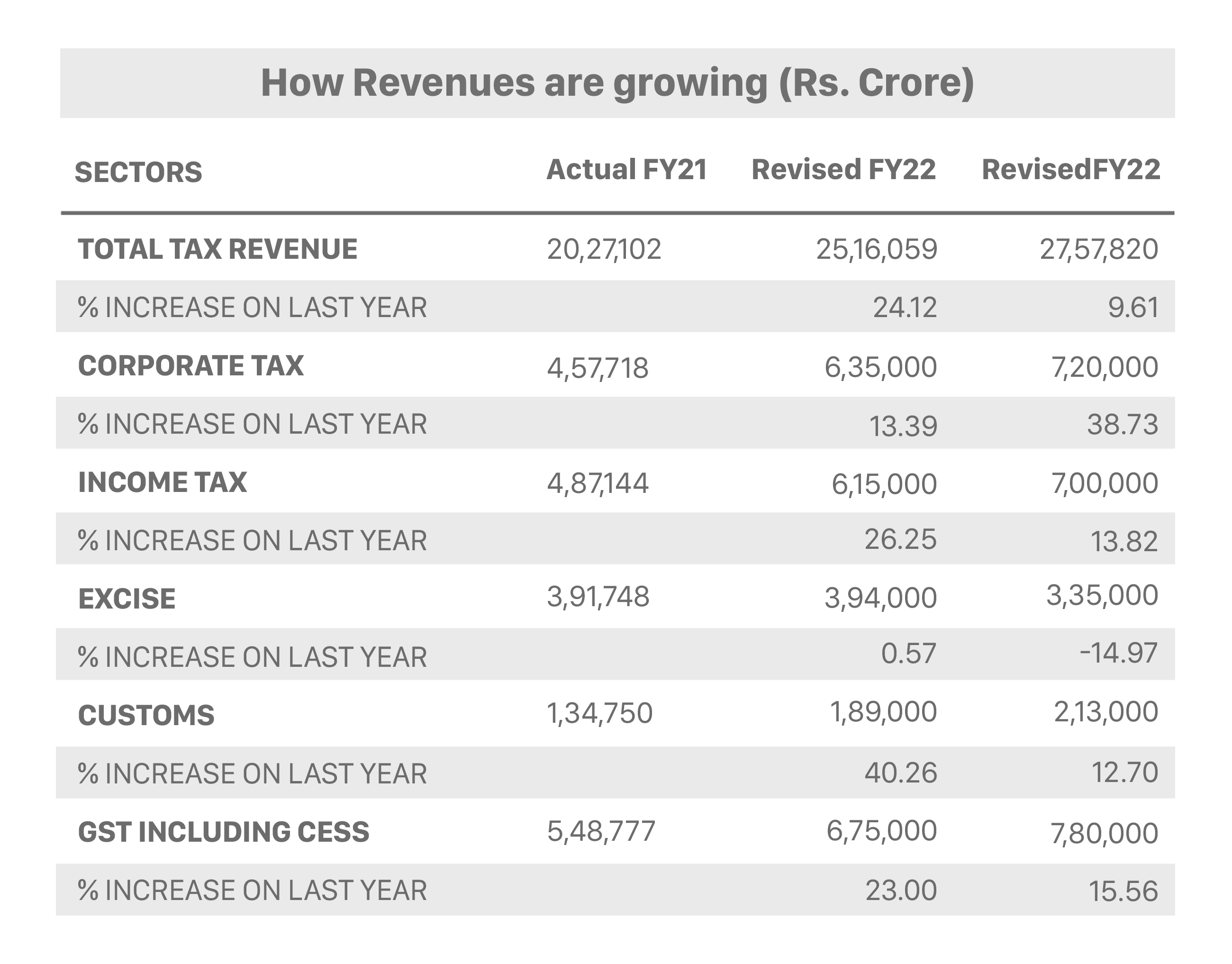 There was some measure of good news in the Budget. Having decided to join the cryptocurrency bandwagon, the government has also decided to tax all crypto assets that are not issued by the RBI. So at least everyone knows where they stand.

For start-ups and new manufacturing industries, tax breaks have been extended to March 31st, 2023 and 2024 respectively. There is a nod to climate change with green sovereign bonds, battery banks, and more support for the Indian solar and battery storage industry.

Unfortunately, the Budget has also gone back to tinkering with customs’ duty rates on various items, much of it under the garb of protecting indigenous industry. The whole idea had been that we would have a simple, clear and transparent customs policy, but that seems to be more in the breach. There are other ways of helping domestic industry than following customs’ duty protection. Increasing protectionism isn’t a solution for slow growth.

This is a Budget that will be forgotten sooner than most as it has little for most people. Maybe the infrastructure drive will pump enough money into the economy for sustained growth. More worryingly, not providing or even enunciating a clear policy on Covid vaccinations comes across as hiding one’s head in the sand, hoping that our scientists are right in saying that most people don’t need a booster now or later. That health hasn’t got the push it deserved after seeing two years of the Covid pandemic is very short-sighted. People can’t be treated by roads, they need hospitals and clinics.

Disclaimer: These are the personal opinions of the author.