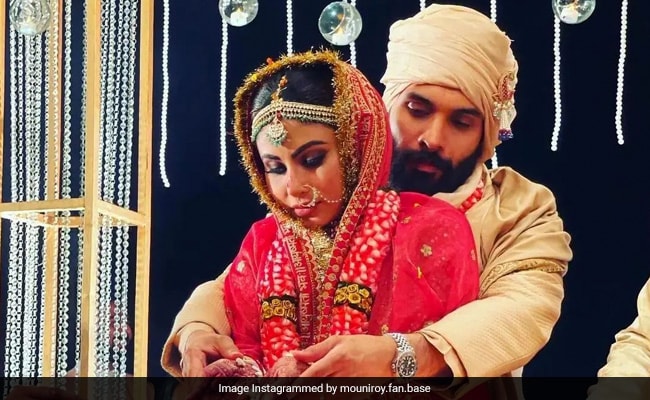 After marrying Suraj Nambiar in a South Indian ceremony on Thursday morning, Mouni Roy and the Dubai-based businessman got married as per Bengali rituals in the evening. The wedding venue was Goa. For the day wedding, Mouni Roy looked every bit stunning in a a white saree with a deep red border and statement gold jewellery. For her evening ceremony, the actress wore a red lehenga while the groom picked a beige sherwaani. Mouni’s friends shared pictures and videos from both the ceremonies, which were later curated by fanclubs.

Meanwhile, Mouni Roy’s friend and TV actor Aashka Goradia shared a picture of the bride and groom and she wrote: “Cause I would write a song if I could… a song about your life Mouni and for Suraj to walk into your life when that song is at its crescendo, as after crescendo it’s that silence where you don’t need words but the song continues.. in our hearts which is constantly blessing you two now and forever. She will love you with all her heart Suraj and I know you will protect her… Forever. You two are a song.. we will sing forever! Love you lots Mouni, cannot help but love Suraj more now… Sweet tears and a heart full of prayers.”

Here are some more pictures from the wedding:

Mouni Roy shared this precious video from her day wedding:

She announced her wedding with this post: “I found him at last … Hand in hand, blessed by family and friends, We re married! Need your love and blessings…27.01.22 Love, Suraj and Mouni.”

Mouni Roy, a popular face in the Indian television industry, has been a part of several shows such as Kasturi, Devon Ke Dev…Mahadev and Naagin, to name a few. She has also participated in reality shows like Nach Baliye 6, Jhalak Dikhhla Jaa 7 and Zara Nachke Dikha. She has been a part of films like Gold and Made In China and will next be seen in Brahmastra.