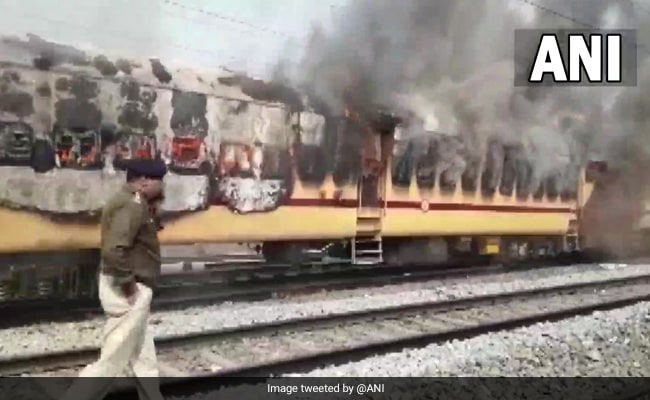 JD(U) is an ally of the BJP in Bihar and also part of the NDA.

Two days after a police complaint was lodged against Bihar’s “Khan Sir” and others for allegedly inciting violence during protests by students opposing the recruitment process by the Railways, Rajiv Ranjan Singh, the national president of Nitish Kumar-led Janata Dal (United) has demanded the withdrawal of cases against the popular teacher and others.

“Khan coaching and several other institutes in Patna are engaged in building the future of poor and talented youth in Bihar and the entire country. Railway/police should withdraw cases registered against them without delay. I appeal to the angry students to maintain peace,” he said in a tweet.

Khan sir, who has never revealed his real name, is a popular teacher from Patna. He runs the Khan GS Research Centre and is known for his unique teaching style. He also conducts lectures online and has a massive following among students preparing for competitive exams.

The FIR has been registered on the basis of statements given by agitating students who were detained on Monday and Tuesday in Patna. They reportedly said they were motivated to indulge in violence after a video, in which Khan Sir allegedly instigated students to agitate on the streets if the RRB NTPC exams were not cancelled, went viral on social media.

The JD(U) leader also said that the anger in students from Bihar, Uttar Pradesh and other states is a response to errors in the process and results of the railway exam. “A committee has been formed to look into the mistakes of the Railway Recruitment Board. I hope for swift justice for the students and job aspirants,” he added.

JD(U) is an ally of the BJP in Bihar and also part of the NDA. The party, which also shares power with the BJP in the state, has caused public embarrassment for its partner several times.

The protests involve the Railway Recruitment Board’s Non-Technical Popular Categories (RRB-NTPC) exam 2021. Students have opposed a decision by the Railways to hold the exam in two stages, claiming that the second stage is unfair to those who have cleared the first stage, results for which were released on January 15.  Around 1.25 crore candidates had applied for the exams that had advertised over 35,000 posts from level 2 to level 6, with starting pay ranging from Rs 19,900 to Rs 35,400 per month. Around 60 lakh people appeared for the exam.

A passenger train was set on fire and another was attacked with stones in Bihar in violent protests by students.

The government has suspended the exam and set up a committee to tackle the grievances of the protesting students. Railway Minister Ashwini Vaishnaw has appealed to the students to not break the law and assured them that their grievances would be seriously addressed.