Kerala Groom Dresses Up As ‘Minnal Murali’ For Wedding 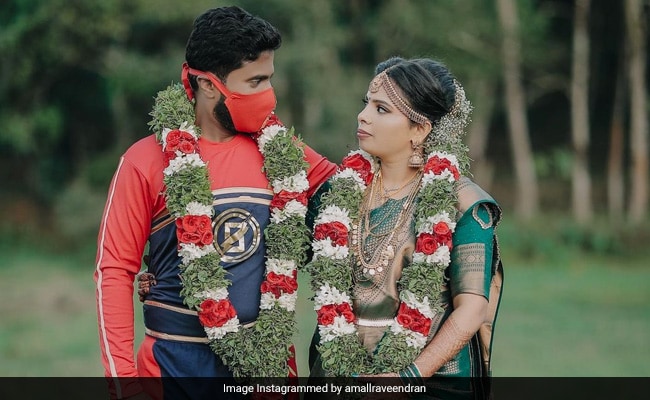 A Kerala groom dressed up as Minnal Murali for his wedding

A groom from Kerala is grabbing eyeballs on social media for his unique wedding outfit. Amal Raveendran showed up for his wedding dressed as Minnal Murali, a desi superhero from a Malayalam movie of the same name. Photos that have gone viral online show thegroom in his Minnal Murali-inspired costume and the bride in a green saree. Mr Raveendran’s red and blue costume was inspired by Tovino Thomas’ character from the film.

Speaking to Indian Express, the 29-year-old revealed that his relatives were supportive of the idea of him dressing up as a superhero.

“Our relatives were excited to see me in the costume after the shoot. My cousins had planned to wear superhero costumes on the wedding day. However, due to Covid and related restrictions, they could not attend the wedding. Many people were curious about the wedding after watching ‘save the date’ video,” he said.

Mr Raveendran was referring to his save the date video which had earlier gone viral online. For that video too, he had dressed up as Minnal Murali.

Meanwhile, the bride Anju KH said that while she had been reluctant about the ‘save the date’ video, the positive response it received put her doubts to rest.

“I was a bit reluctant during the save the date video shoot. However, it turned out well and we got positive response from friends and family. I was very enthusiastic during the post-wedding shoot. Some of my friends even call me ‘Minnal’,” Anju told Indian Express.

Compliments and congratulatory messages have poured in for the Kerala couple, with some even calling on Tovino Thomas to take note of the wedding photoshoot.

Minnal Murali was released on Netflix last month. The film follows the story of a tailor (played by Tovino Thomas) who gains super powers after being struck by lightning.