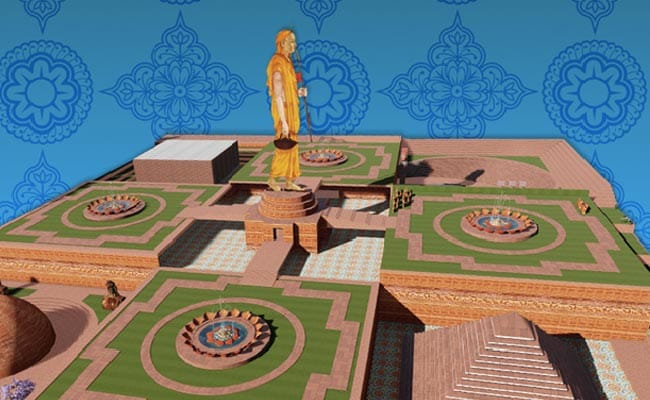 The statue and the Shankar Museum will be set up on an area of 7.5 hectares.

The Madhya Pradesh government has said that a Rs 2,000 crore project to set up a 108-feet tall statue of religious leader and philosopher Adi Shankara, or Shankaracharya, and an international museum in the state will connect it to the rest of the world. Chief Minister Shivraj Singh Chouhan last week addressed a meeting of the Board of Trustees of Acharya Shankar Sanskritik Ekta Nyas to discuss the project. Prominent saints and trust members including Swami Avedhashanand Giri Ji Maharaj attended the meeting.

The opposition Congress has raised doubts on the project and said it will only discuss it once funds are allocated in the state budget. The party has also pointed to massive debts that the state has incurred.

The Chief Minister said that the project to set up a 108-feet multi-metal statue of Adi Shankara Museum and International Vedanta Sansthan at Omkareshwar will connect the state with the world.

The height of the statue, called the Statue of Oneness, will be 108 feet and it will be installed on a 54 feet high platform. The statue and the Shankar Museum will be set up on an area of 7.5 hectares on the Mandhata mountain. A gurukulam will be developed on the other side of the Narmada river in a 5-hectare area and Acharya Shankar International Advaita Vedanta Sansthan will be developed in a 10-hectare area.

Mr Chouhan said that the installation of the statue of Shankaracharya at Omkareshwar is a project to bring practical Vedanta to life. “Let this world become one family, this is the aim behind it. The state government will implement the suggestions given by members of the trust and work will be done expeditiously to finalise the entire action plan,” he said.

Leader of Opposition Kamal Nath said that it should not be taken seriously. “When the money for the project is allotted in the budget, then we will discuss it,” he said.

This expenditure on a statute comes at a time when the state’s debt is more than the total budget allocation. The budget of the state is Rs 2.41 lakh crore but the total debt is Rs 2.56 lakh crore. Per capita debt in the state is around Rs 34,000.

The Congress has demanded a white paper on debt. Former minister and senior Congress leader Jitu Patwari said, “The state already has a debt of Rs 2.56 lakh crore to repay but the Shivraj government is taking loans regularly on one or the other pretext. Now, it has decided to take a loan of Rs 48,000 crore. The state government should issue a white paper on the status of its finances.”

The announcement also comes as a standing rabi or winter crop spread over hundreds of acres in 18 districts of the state was damaged after the state witnessed a hailstorm followed by heavy rain on Friday evening. A farmer was seen in a video falling at the feet of former MLA Mahendra Singh Yadav after the unseasonal rain hit his crops in Madhya Pradesh’s Shivpuri district. In Ashok Nagar, ruling BJP MLA Jajpal Singh promised farmers that he, “Will quit and protest if there will be irregularities in compensation.”

Madhya Pradesh Agriculture Minister Kamal Patel said officials from the revenue and agriculture department were surveying the affected villages. He said 25 per cent of the compensation money will be paid immediately to farmers.